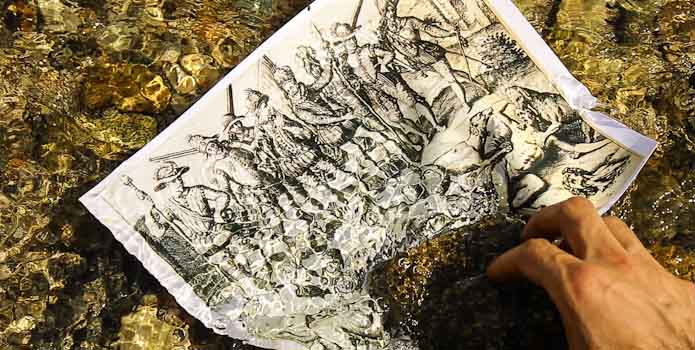 Carlos Motta’s video is a work of such economy and such theoretical exactitude that it hardly bears criticism. It virtually explicates itself, which is not to say that it is lacking in sensual pleasures or emotional valence. (Far from it.) Consisting almost entirely of a boat trip down the Don Diego River in Colombia, Nefandus is an inquiry into homosexual practices that were common to the peoples indigenous to the area, prior to the arrival of Hispanic colonists who, armed with Leviticus, branded such behaviors “abomination,” and those who engaged in the “sodomites.” More than this, Motta and his collaborator Arregoces Coronado (speaking the local language of Kogi) discuss how the settlers Biblical law instantiated a wholesale remapping of the male body, in which “the anus became the locus of male vulnerability.” The river is the only remaining witness to a centuries-old attempt to erase outlaw desires, but as Motta makes clear, the nefandus (nefarious, anathema) was a force that could never be extinguished. A deeply intelligent, truly righteous film.