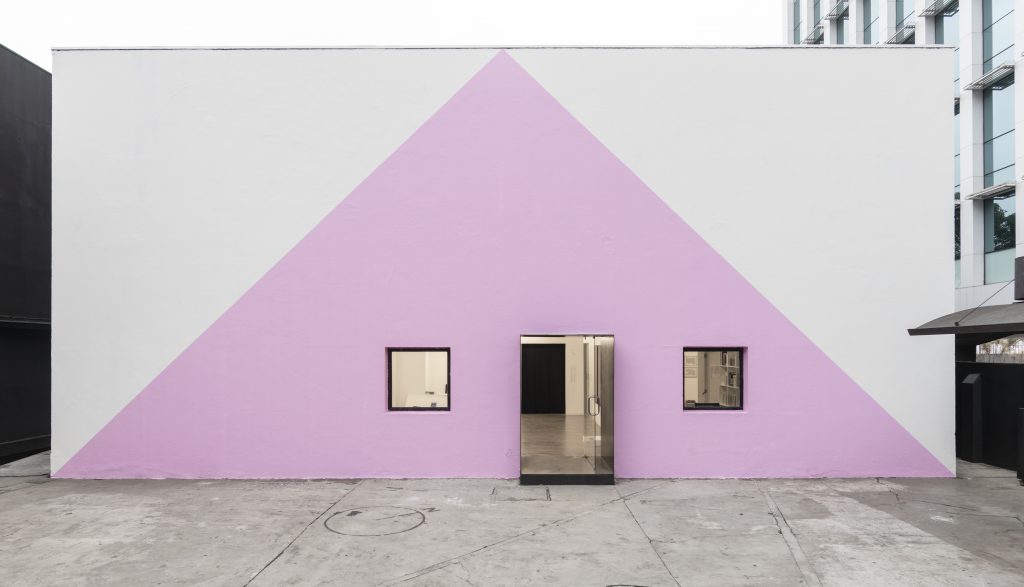 Shapes of Freedom: Triangle revisits the history of the pink triangle and other sexual diversity symbols to highlight the importance of collective organizing to achieve social freedom. The mural is accompanied by a historical timeline listing important moments of LGBTQI+ history in Brazil and abroad, developed in collaboration with Guilherme Altmayer.

Through video, photographs, sculptures, and installations, Carlos Motta critically engages and documents the social conditions and the historical and present-day political struggles of sexual, gender and ethnic minorities in order to challenge dominant and normative discourses through visibility and self-representation.

Among the main features of Carlos Motta’s work is the narration of historically suppressed stories of sexual-and-gender different individuals and communities, in an attempt to produce counter-narratives that acknowledge non-hegemonic accounts of history. In WE THE ENEMY, Motta contrasts stories of historical and contemporary sexual and gender repression to defy conventions of story-telling, its terms and forms of representation, and the writing of history. 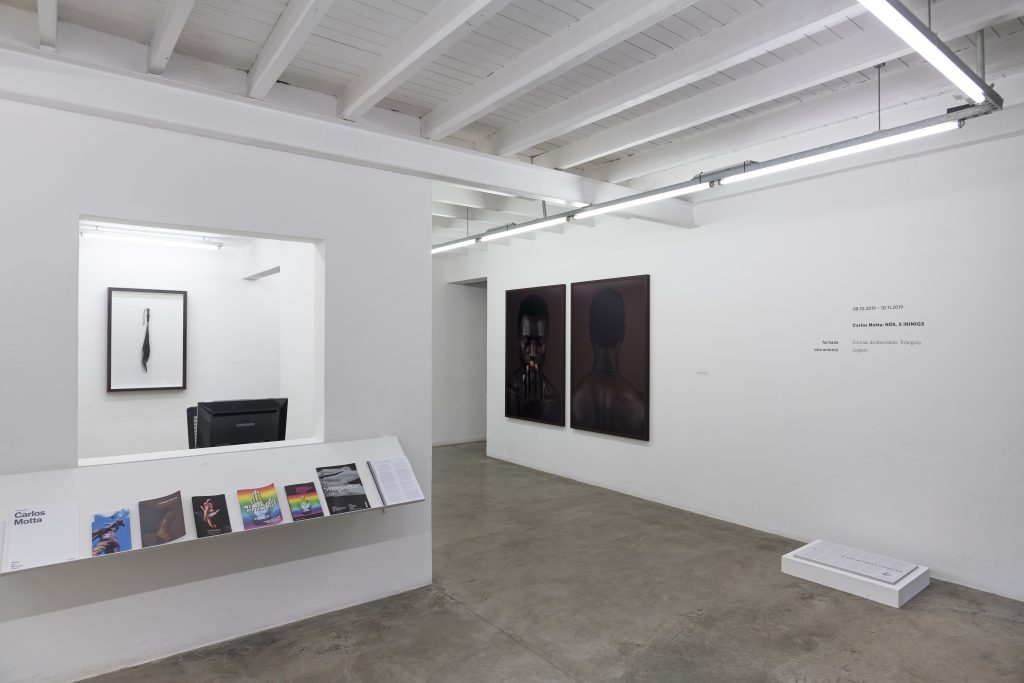 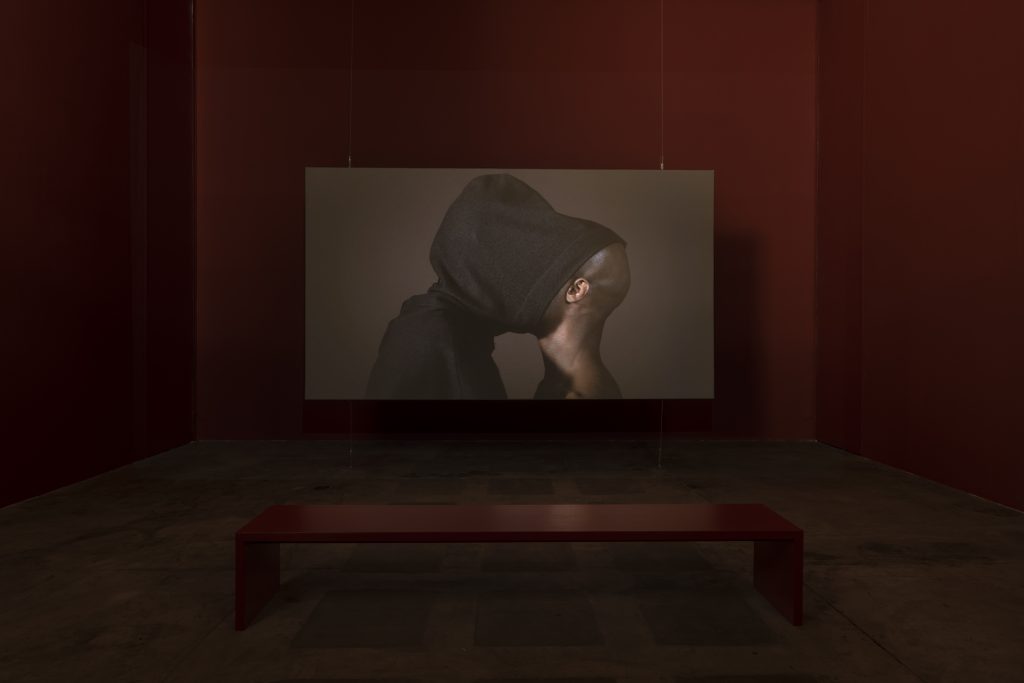 Corpo Fechado: The Devil’s Work
This 2018 film tells the story of José Francisco Pereira, a man who was kidnapped and sold into enslavement in the 18th Century. Pereira was taken from Uidá (now Benin, in West Africa) to Pernambuco, Brazil, where he performed syncretic practices in order to survive. Sold to a slaveholder in Portugal, Pereira was caught making amulets –bolsas de mandinga – for his fellows enslaved men and women. In 1731 Pereira was tried by the Lisbon Inquisition for sorcery. In addition, Pereira confessed to having made pacts and copulating with a male demon, and was thus also sentenced for sodomy. José Francisco Pereira was then condemned to be an enslaved rower on a galley ship, sent into exile, and was forever banned from Lisbon. 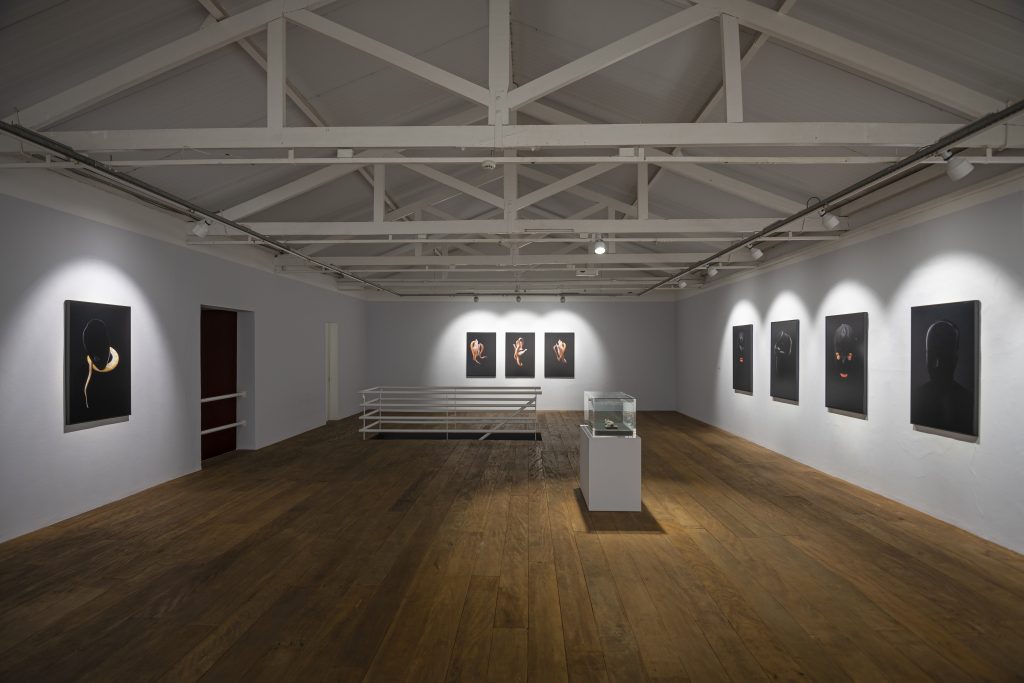 Midway upon the journey of our life I found myself within a forest dark / For the forward pathway had been lost  and Senhor morto
This series of photographs present a hooded figure handling snakes. Like the sculptural whips in Corpo Fechado, the images refer to gay fetish practices associated with “sexual deviance.” As Jack McGrath has phrased, “Sleek and louche and dark and sly, the shades in Motta’s photographs are arrayed around a dead lord, Senhor Morto, submerged at center. Motta created the bronze effigy in the image of an 18th century wooden sculpture in São Paulo, an ecclesiastical object crafted by artisans working in colonial subjection. As an artifact of exploitation, the piece indicts the art and religion that assisted the colonial system. As Benjamin wrote in On the Concept of History, ‘There is no document of civilization that is not at the same time a document of barbarism’.” 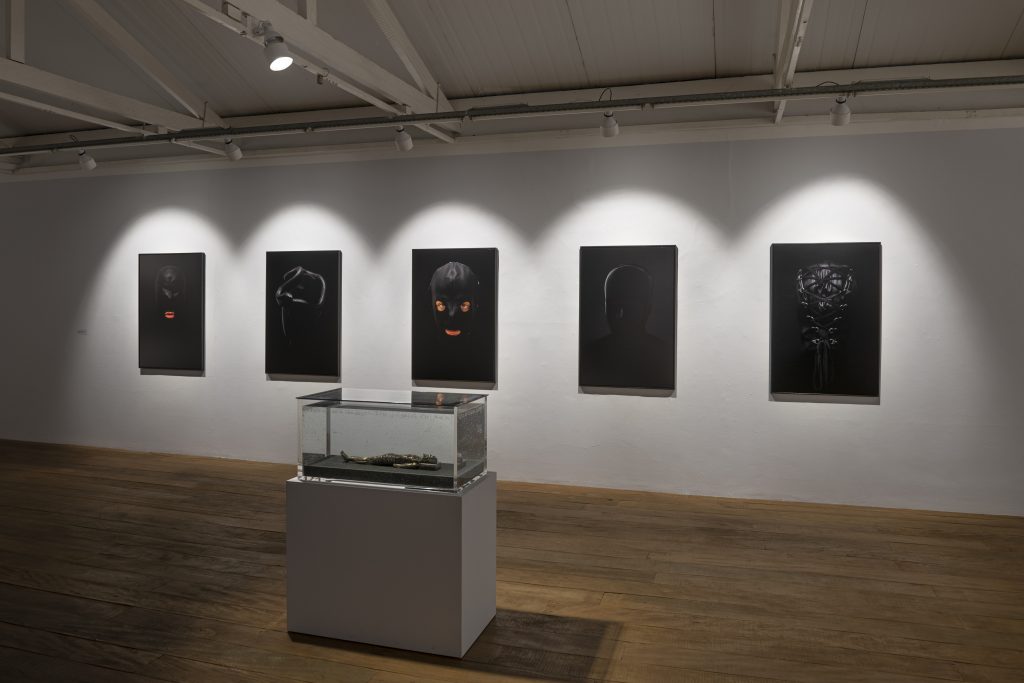 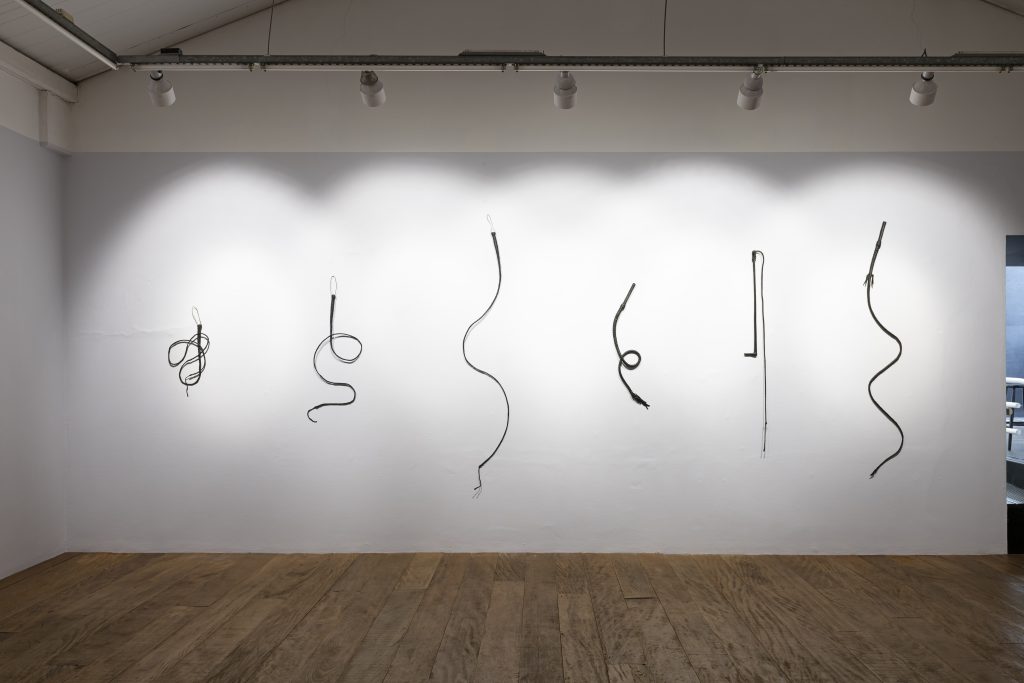 Corpo Fechado is comprised of a series of vintage whips (bought by Motta from obscure sellers on E-Bay) cast in bronze and sculpted in such way that their motions appear as a frozen instant. These pieces are also part of the series of sculptural and photographic objects that relate to Corpo Fechado: The Devil’s Work. Like in the film, there is a reversal on the handling of the whip as it is wielded by José Francisco Pereira, an oppressed man who now seizes his own power. These tools for punishment are inverted in these works, drawing near to BDSM practices where pleasure and pain converge, and where relations of power and submission are nothing but consensual. 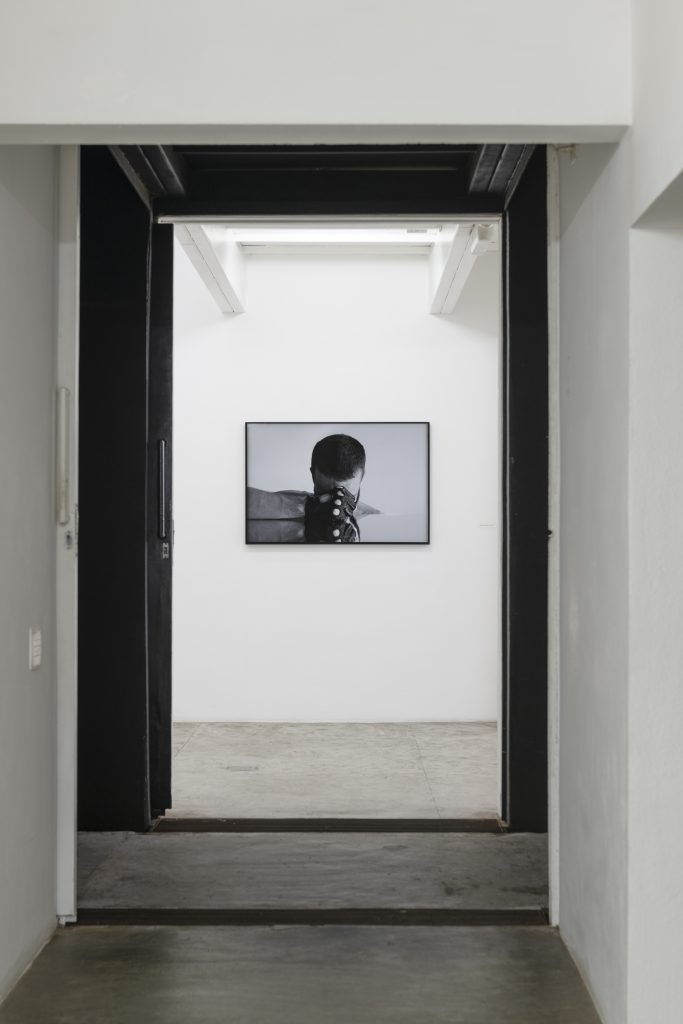 Untitled Self-Portrait # 3 is a photograph where Motta depicts himself simultaneously mournful and resolute, showing a clenched resilient fist, and resting his wistful head on a mirrored surface. As Jack McGrath warns: “Sometimes to gaze into a mirror is to see the malefactors of history leering back out, and real progress requires the courage to criticize even oneself.” 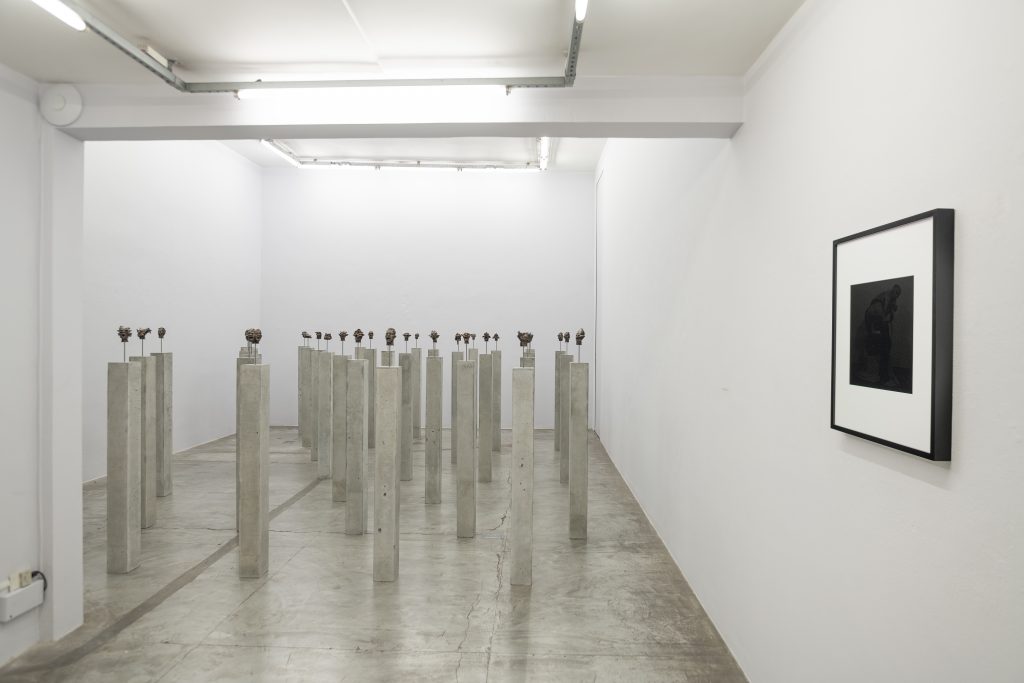 Self-Portrait with Whip (after Robert Mapplethorpe’s Self-Portrait with Whip, 1978)
Carlos Motta re-enacts Robert Mapplethorpe’s infamous self-portrait, in which the artist is pictured with a whip up his anus, like an animal tail. In Motta’s version, the image is darkened almost to invisibility, like a dark mirror, both defying the viewers’ gaze and reflecting them on its surface. 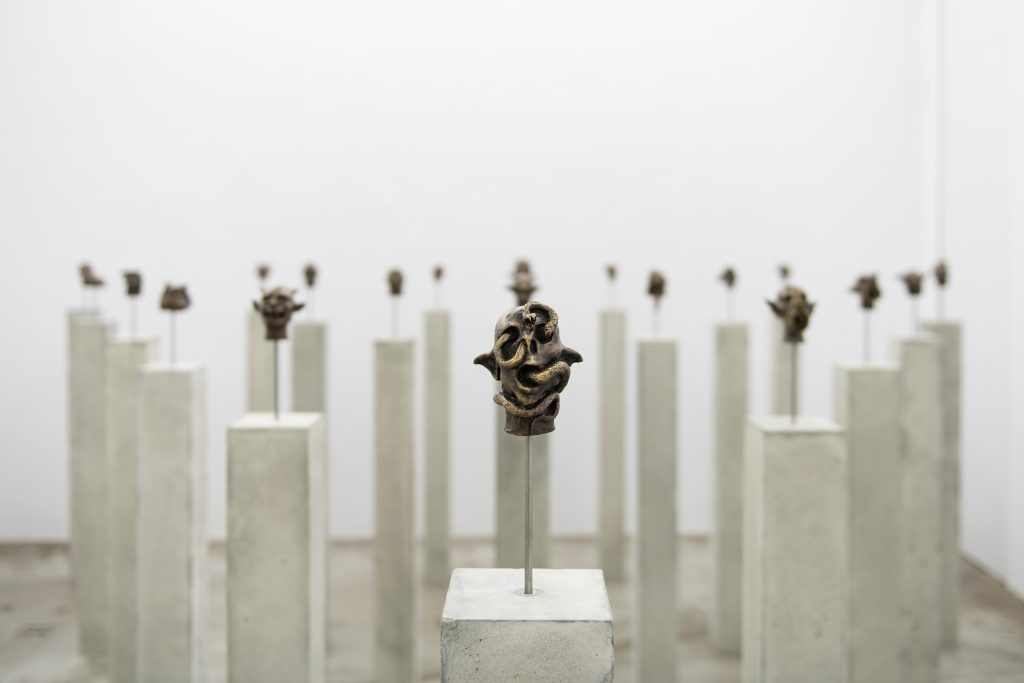 We The Enemy is comprised of a set of 40 bronze sculptures based on representations of the devil drawn from art history: historical paintings that portray Satan in hell, drawings, illustrations, and sculptures that represent evil embodied. Each figure defies normative moral standards of beauty, respectability, and behavior. Among this army of demons, there are characters who suggest sexual perversion – as typified by traditional catholic imagery. 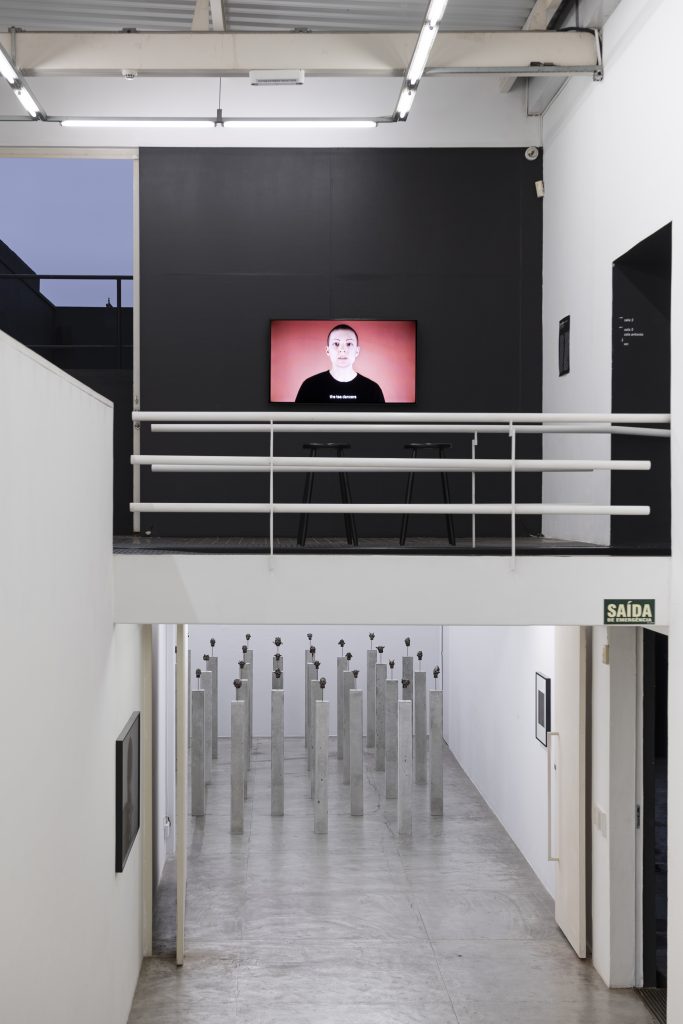 WE THE ENEMY by SPIT! (Sodomite, Inverts, Perverts Together!) is a collective formed in 2017 by Carlos Motta, writer John Arthur Peetz, and artist Carlos Maria Romero. SPIT! wrote a series of queer manifestos that were initially performed at Frieze projects, London. In the 2019 video, Greek artist Despina Zacharopoulos performs WE THE ENEMY, a summary of derogatory slangs and insults to queer people. Spoken by Zacharopoulos with defiant pride, these terms are re-appropriated becoming watchwords or a kind of summoning of the powerless. 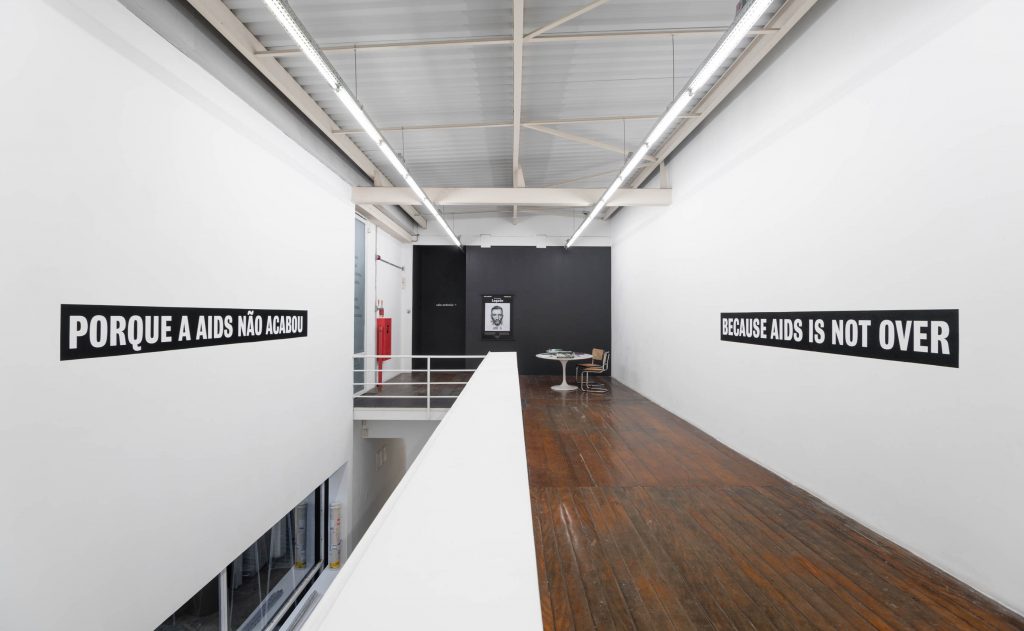 Legacy is a video piece that presents a 30-minute endurance performance made by Carlos Motta for the camera. Legacy shows the artist looking straight at the camera as he wears a dental gag, while he tries to read out a timeline of HIV/AIDS, from 1908 to 2019, dictated to him by American radio broadcaster Ari Shapiro. Unable to speak clearly, struggling to remember the lines and in pain, the artist gradually and visibly exhausts himself. This research was made in collaboration with Ted Kerr. 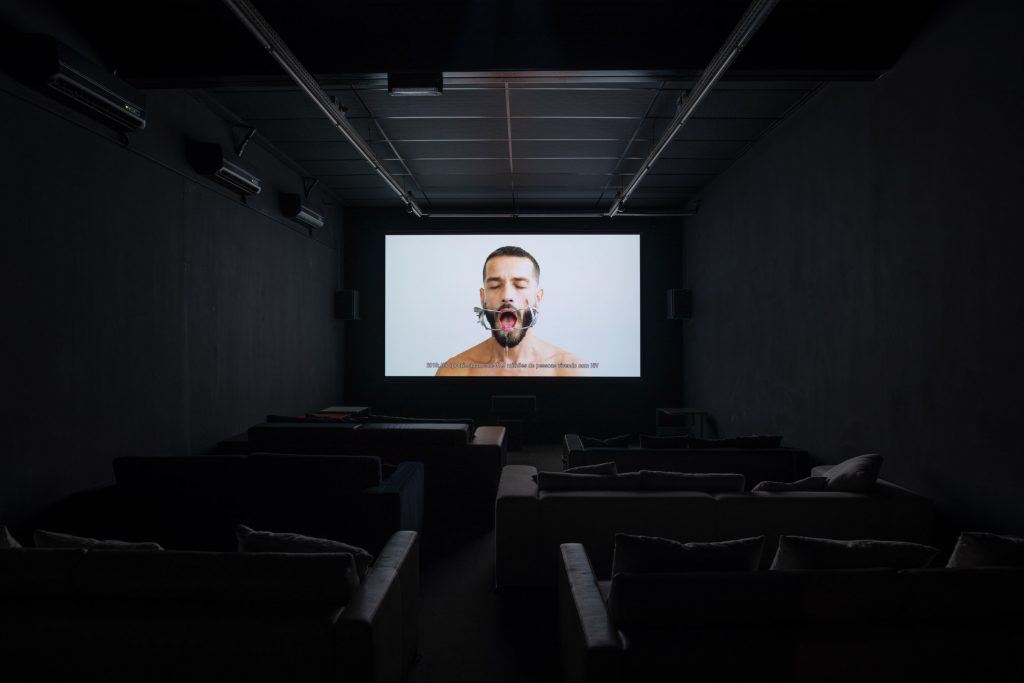 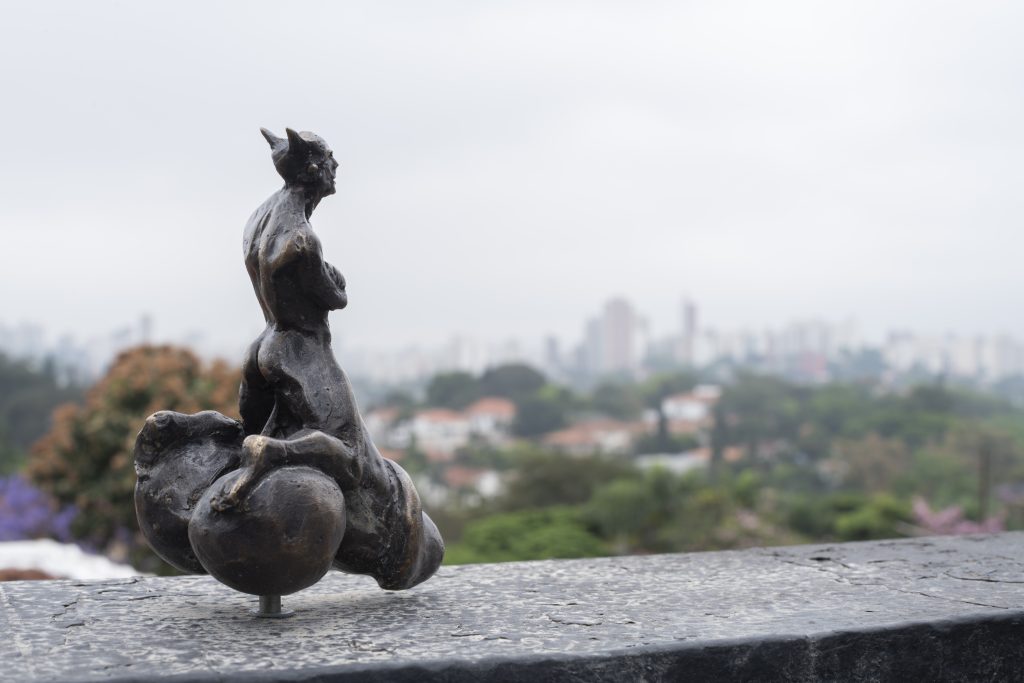 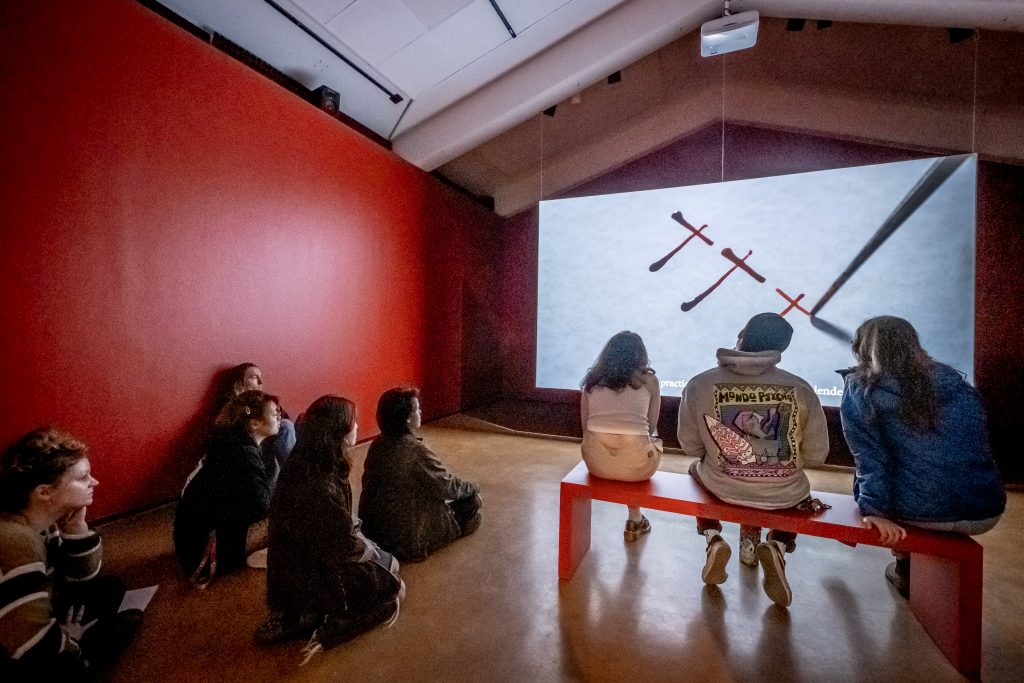 We The Enemy features recent works that question—and challenge— how productions of difference propel social oppression. With video installation, performance documentation, and works in other media, We The Enemy tracks the persecution of LGBTQIA+ individuals from colonialism in the Americas to current border politics and through the history of medical research and HIV/AIDS. We The Enemy documents these repressed histories to form a powerful record of rising resistance. 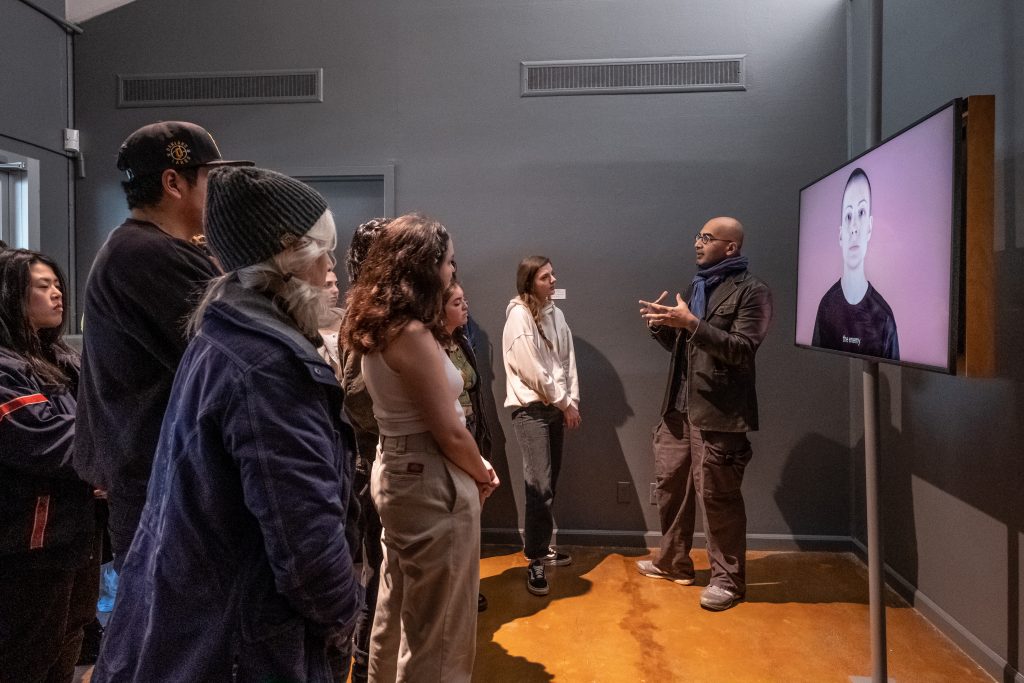 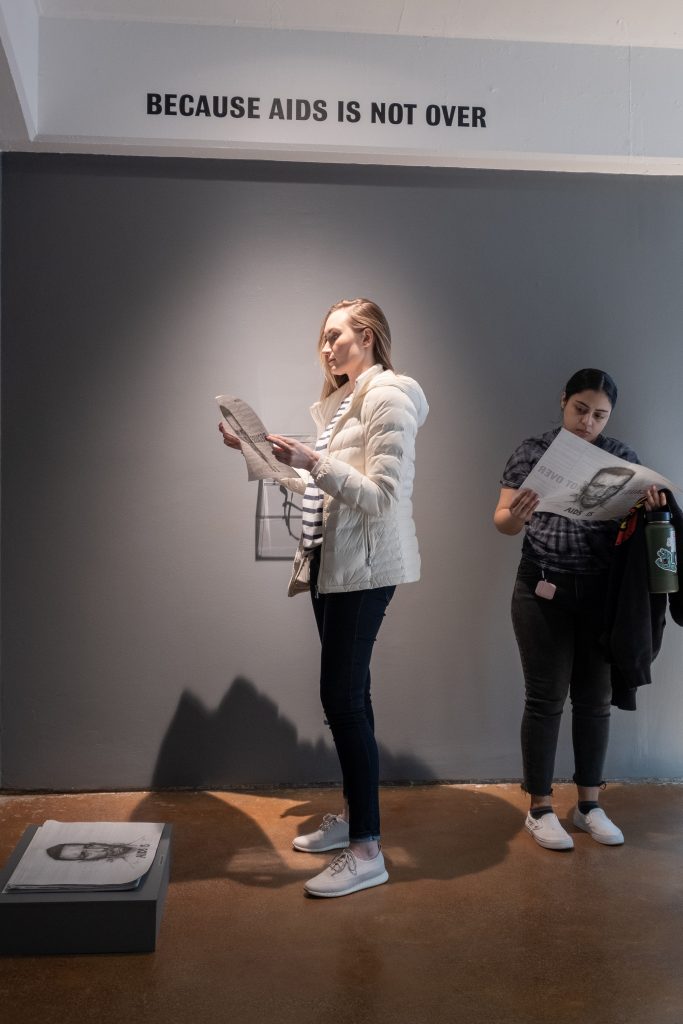 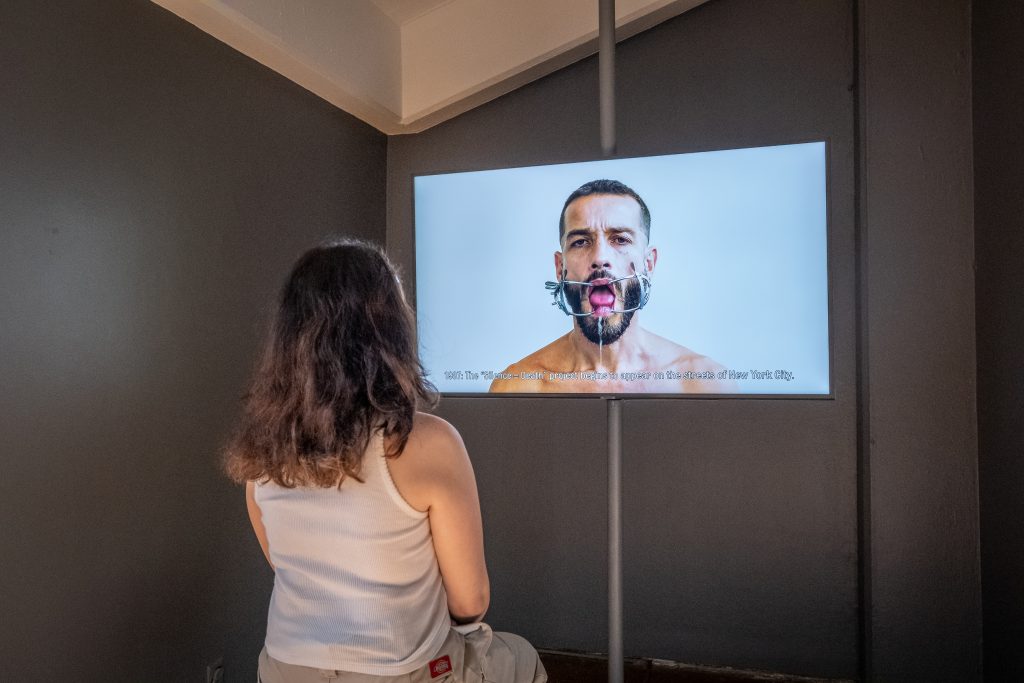 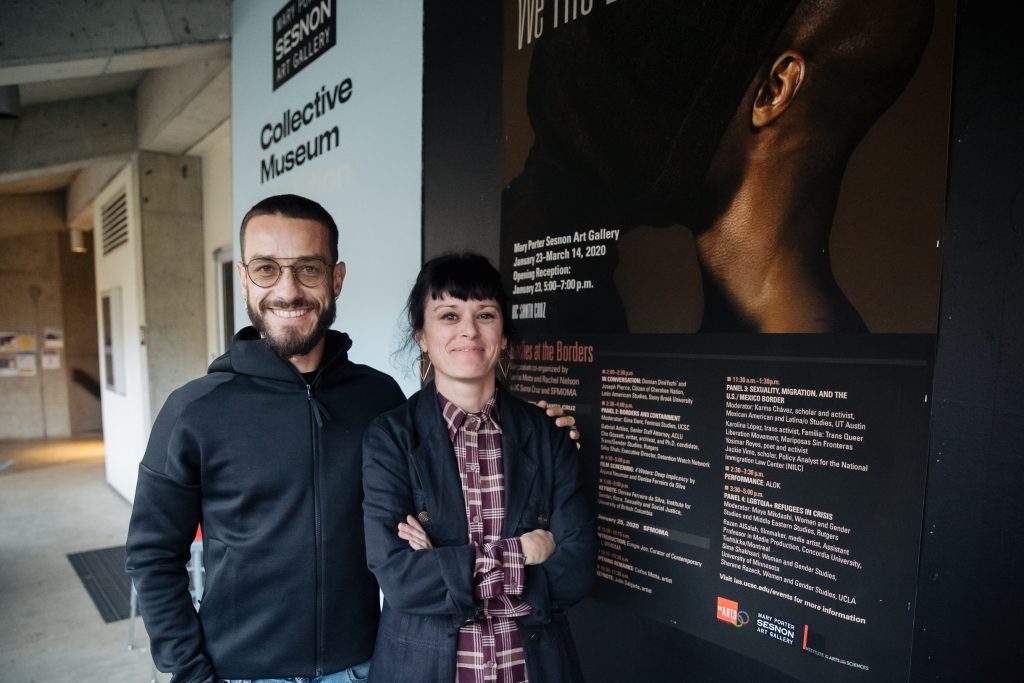