Carlos Motta with Julio Salgado, Heldáy de la Cruz, and Edna Vázquez: We Got Each Other’s Back is a three-part multi-channel video installation featuring portraits of queer artists and activists in the U.S. who are openly undocumented migrants and are actively producing work to denounce the historic and present-day broken immigration policies in the US. The project also includes live and online events that engage the challenges faced by undocumented migrants.

The first exhibition of We Got Each Other’s Back, featuring the project’s first chapter, Narrative Shifter: A Portrait of Julio Salgado, is a collaboration with LA-based artivist and creator of the “Undocuqueer” project Julio Salgado, and was presented in the exhibition Soft Power at The San Francisco Museum of Modern Art (SFMOMA) (10/19-3/20), curated by Eungie Joo. The first event was the two-day conference Bodies at the Border at SFMOMA and University of California Santa Cruz (UCSC) on 1/20, co-organized by Motta and Rachel Nelson. The second and third chapters Edna Vázquez: Sola Soy (I am Alone) and Heldáy de la Cruz: Desierto a desierto (Desert to Desert) premiered at the Portland Institute of Contemporary Art (PICA) in an exhibition curated by Kristan Kennedy and Roya Amirsoleymani.

The installation is framed by the 30′ wall vinyl, A Timeline of Migration and the DREAM Act From 1982 Until 2019, created by Roxana Nallely Herrera Ramirez with support from the New York State Youth Leadership Council (NYSYLC). Exhibition design in collaboration with Daniel Greenfield and Spencer Byrne-Seres. 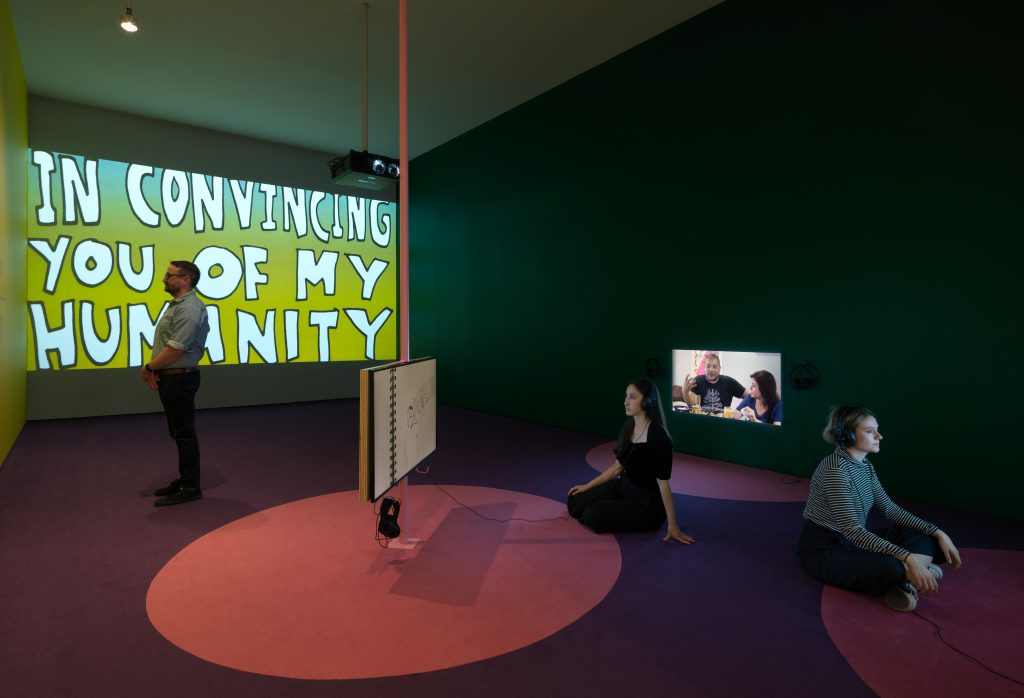 Julio Salgado: Artist
HD video, sound, 19 minutes 28 seconds
In his home-studio in Boyle Heights, Julio discusses his artwork and art practice. He discusses his early and current influences, the topics that make up the content of his work, the ways in which his artwork circulates on and offline, his formal process and key motives, and his objectives for the future.

Julio Salgado: Narrative Shifter
HD video, sound, 21 minutes 32 seconds
Julio returns to Long Beach City College, where he conducted his studies in journalism. Using the college campus as a backdrop, he discusses the emergence and progress of the DREAMers movement, attentively describing the complex social and political conditions that affect these communities. He also addresses his own undocumented status.

Julio Salgado: Family Life
HD video, sound, 9 minutes 25 seconds
While making and eating brunch, Julio, his parents, and sister, discuss their immigration story. In this intimate video, the family reflects on their life experiences as migrants, the reasons why they migrated, and their life in the U.S. 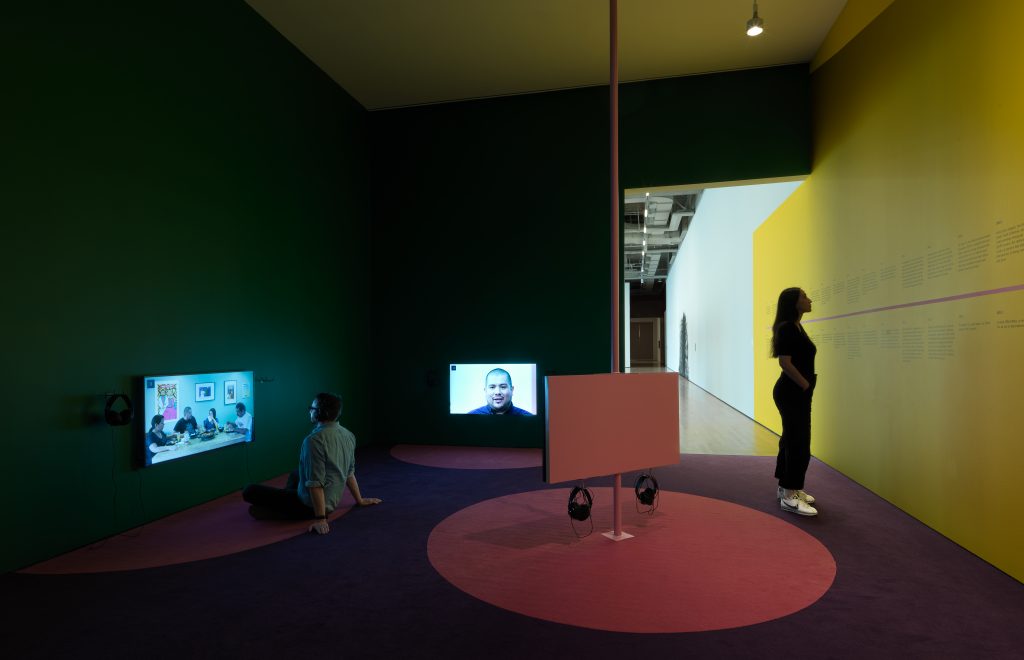 Edna Vázquez: Sola Soy presents an interview with Mexican-born, Portland-based, singer/songwriter Edna Vázquez, and a performance for video of three of her original songs: “La puerta” (The Door) “Pajarillo soñador” (Dreaming Bird) and “Trasciendes” (You Transcend), accompanied by guitarists Diana Ruiz and Edgar Baltazar. Formerly undocumented, Edna has used her music to speak to the oppressed and marginalized. Sharing her personal story and an acute relationship to history, Edna provides to her audience a sense of political possibilities and personal strength. The installation at PICA is also a stage where Edna will perform during the exhibition. Edna Vázquez: Sola Soy (I am Alone)
HD video, sound, 15 minutes 10 seconds
In this interview Edna shares her personal story of migration to the United States and chronicles her undocumented years and her means of survival, which included working for a mariachi band and becoming a professional singer and song writer. Now documented Edna, speaks about how those early years shaped her life and shares her political drive and artistic forms of activism. Heldáy de la Cruz: Desierto a Desierto presents an interview with Mexican-born, Portland-based, illustrator and designer Heldáy de la Cruz; performances inspired by three spoken-word poems written by him and accompanied by corresponding built sets; and a collaborative video performance piece with the late performance artist David Andrew Torres. Heldáy uses his art, community work, and life experience to uplift the voices of undocumented people. He shares his family story and dives deep into what it means to experience love and loss through an undocumented and queer perspective.

Heldáy reads three poems written by him to illustrate the three sets, designed in collaboration with Gabi Villaseñor, for this project. Interspersed between the poems is Cuando Dos Almas (When Two Souls) (2019), a performance collaboration between Heldáy and the late David Andrew Torres, where the two lovers explore the forces of relationships. David uses his body as a force that comes and goes, distracts, pulls, and holds the subject. This video performance is accompanied by the song Return by Adam Elabd.

Heldáy explores themes of home within his undocumented status, his need for objects that connect him back to this place, the things he can and cannot do, and the deep-rooted pain in the journey across the border through his mother’s eyes. This set is an ode to all of the objects that hold cultural relevance, and Heldáy is in the center moving around.

Heldáy explores the activism within his art, his work with the community, and the conditions that led him to develop his craft. In this video Heldáy stands at the center of the set performing slow movements, holding his pencils and tools, and surrounded by prints of his graphic and illustrative works.

Heldáy explores grief and relationships within his queer identity. This set is an altar that highlights two major losses that happened within a year of each other: the loss of this mother and his lover to cancer. Heldáy seeks to honor them both by bringing in moments of pain and joy centered around queerness through his performance.

In this interview, Heldáy sits with Carlos Motta to discuss his journey to the United States, family history, the important role of objects, and the underlying themes of secrecy, fear, and community that show up in his art due to his intersectional identities.