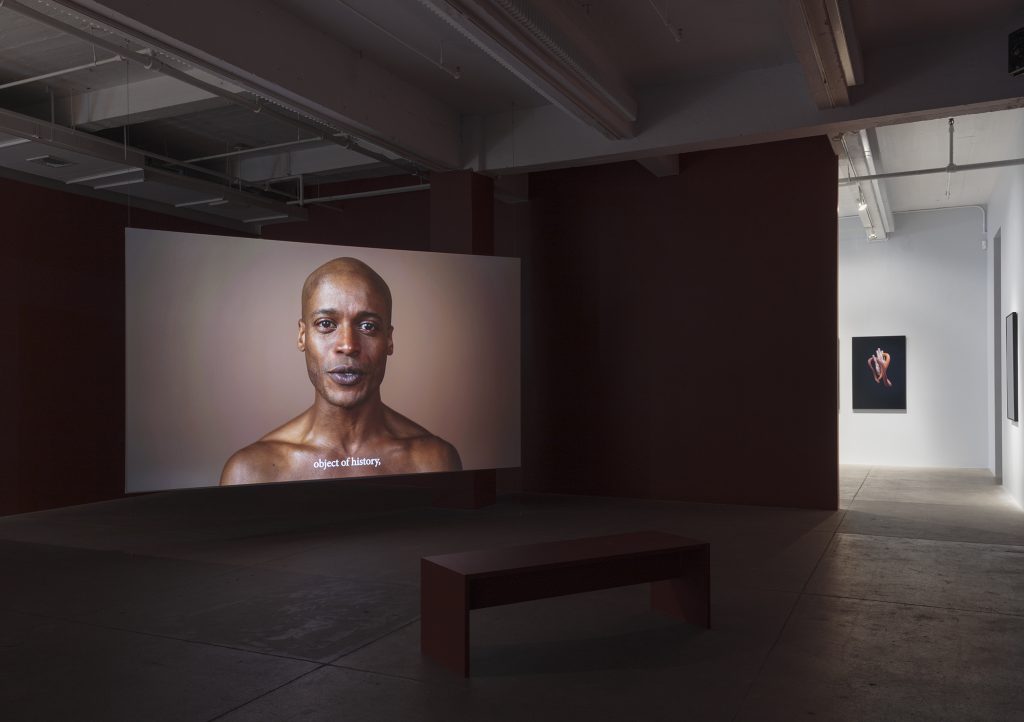 This exhibition is named Conatus, the Latin word for ‘striving, endeavor, inclination.’ ‘Conatus’ means the desire of each person or thing to persist in itself. For Baruch Spinoza it signified a vitalism at the heart of an impersonal universe. For Judith Butler it means the drive for mutual recognition and representation. Throughout this exhibition, desire and selfhood entwine, and persistence endures under the most adverse of circumstances. Historical traumas erupt into the present. Baroque performance restages allegories of history. Gods sin, devils redeem, and oppressive imprecations become the litanies of survival. Conatus persists through it all, a throbbing, desirous vitality just discernable beneath the din of our historical present.

This multilayered video relates the true story of José Francisco Pereira, an 18th century man who was kidnapped from West Africa and sold into slavery in Brazil. As a means of survival, Pereira, movingly played by Angolan actor Paulo Pascoal, along with others in enslaved communities developed syncretic spiritual practices that mixed African with Christian tradition, in the form of bolsas de mandinga — amulets to protect fellow enslaved persons from injury. In 1731, after Pereira was sold to a slaveholder in Portugal, the Lisbon Inquisition discovered the practice and tried him for sorcery. Notably, he was also charged with sodomy, since he confessed to copulating with male demons in the course of making the amulets. Pereira was exiled from Lisbon and condemned to end his days as an enslaved rower on a galley ship. Corpo Fechado: The Devil’s Work imagines Pereira as the agent of his own narrative, reclaiming the terms of representation from the account of his own destruction. 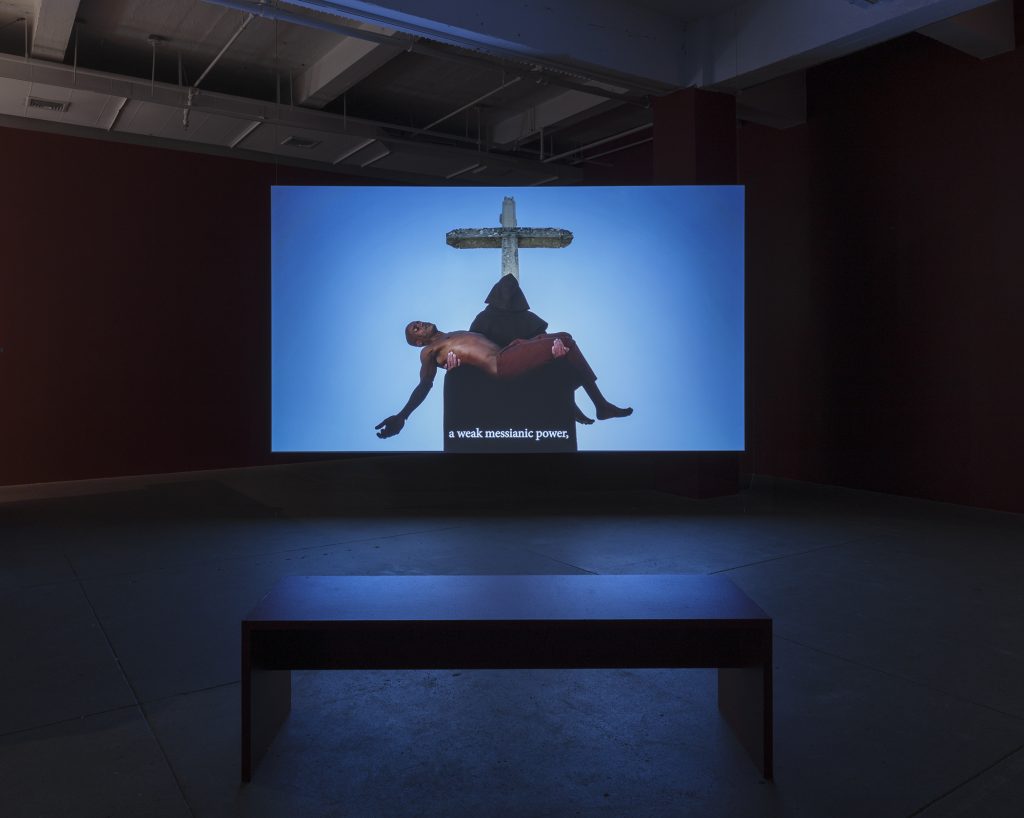 The video interweaves Pereira’s story, drawn from court documents, with two other texts. The first is Letter 31 – The Book of Gomorrah, an 11th century screed by the Italian monk Peter Damian (now a saint), which laid significant foundations for Christianity’s millennium of persecuting so-called sodomites. The discourse of the sodomite also played a central role in European colonialism, a theme Motta has extensively explored in earlier video works such as Nefandus Trilogy (2013) and the installation Towards a Homoerotic Historiography (2014), among others. Damian, played by Motta’s lover John Arthur Peetz to terrifying effect, stalks the film as a robed and faceless menace. In one scene he plays chess with a visibly nervous Portuguese conquistador (actor Vicente Wallenstein). In front of a giant map of the Americas, the game stages an allusive pantomime of the Iberian Empires which would divide the New World between them. The scene also recalls the life-and-death chess game of the Knight and Death in Ingmar Bergman’s The Seventh Seal (1957), although in this case the noble wanderer is just as cruel and deadly as the robed figure eight squares away. 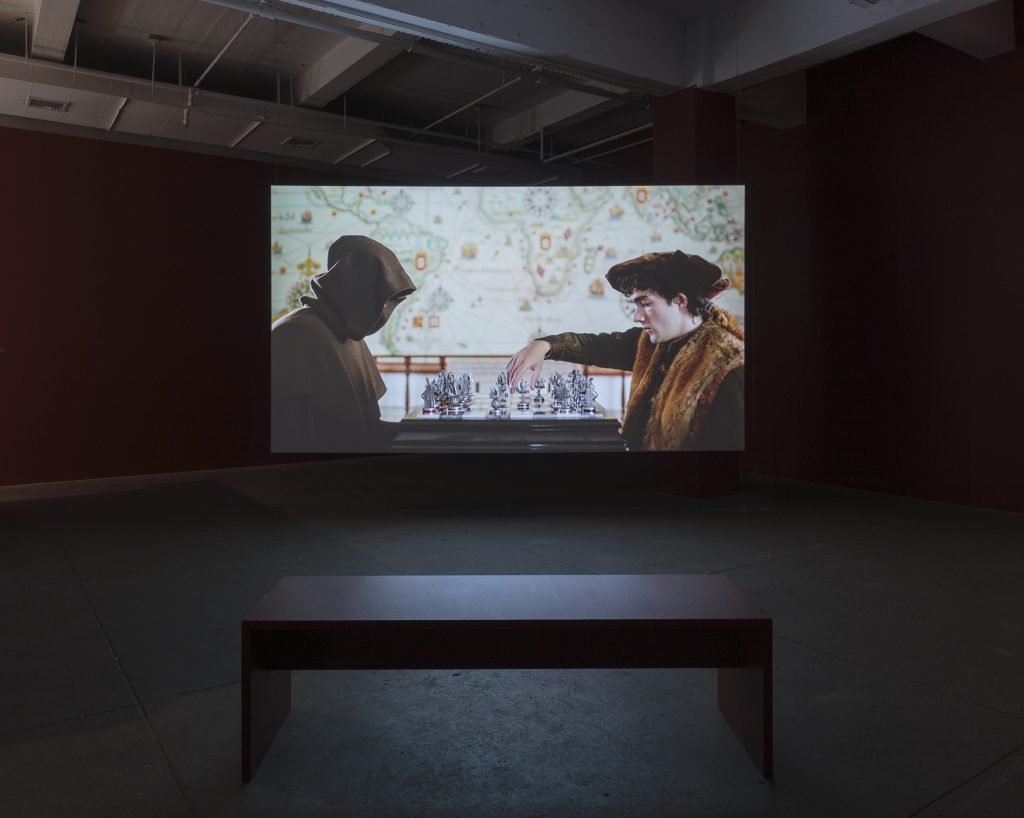 The second intertext is Walter Benjamin’s famed essay On the Concept of History (1940), also known as Theses on the Philosophy of History. In Corpo Fechado, Pereira incarnates Benjamin’s Angel of History, a seraph caught in a storm blowing from Paradise, propelled inexorably into the future yet facing backward, doomed to see only the wreckage of the past. Against whiggish historicism and naïve confidence in ‘progress,’ Benjamin advocates a materialist historiography that will “brush history against the grain” to “grasp the constellation our present era forms with a definite earlier one.” In the letter and spirit of Benjamin’s method, Motta’s film brings together little-known figures like Pereira and Damian, retrieved from archives of a distant past, for a story of migration, race, sexuality, law, and belief, whose contemporary urgency reframes conditions of the present.

In a departure from Motta’s previous practice, Corpo Fechado embraces a baroque theatricality. For Benjamin, it was precisely baroque theater that could confront the contradictions of history, often through allegorical combinations of disparate elements. Although Motta does not abandon the conceptualist techniques for which he is known, his present work composes elliptical vignettes that assemble his historical material in imaginative arrangements. Certain vignettes are redolent of Spanish Baroque. When Pereira or Damian wield instruments of mortification before a spare brown setting, for example, both the chromatic range and mise-en-scène recall the paintings of Diego Velázquez or Francisco de Zurbarán. Today we live again in a baroque era. Like that earlier one, our age invents ever more globalized injustices even as it lurches back into our most regressive tendencies. Motta’s allegorical montage summons the pasts that have a claim on this particular present, a reminder that the price of redemption will be messianic destruction. The angel arrives to avenge as much as to redeem.

This video records an interview Motta conducted with Paulo Pascoal, the actor who plays José Francisco Pereira in Corpo Fechado. Well-known in his home country of Angola, Pascoal worked for years in New York before moving back across the Atlantic. But when he came out as gay in a 2014 TEDxLuanda talk, Pascoal received death threats and was forced to relocate again. He now resides in Lisbon where he is trapped in a sort of immigration limbo, unable to re-enter Portugal should he ever leave. With uncanny fidelity, the biography of the actor therefore resonates with the life of his character, mutatis mutandis, crisscrossing oceans of both water and time in spectral fulfillment of Benjamin’s historical method.

In the interview, Pascoal reflects on the tangled knot of intersectional identities he must inhabit daily. Attentive to gender, race, class, nationality, and sexuality (among other factors), Pascoal relates a lived experience that is neither simple nor stable. He points to the enormous complexity of interlocking and often contradictory selves that so often get reduced to singular labels. In one sequence, we witness the very moment of his coming out on national television. In one and the same utterance, agency and disempowerment coexist, and the single word ‘gay’ irrevocably alters his life and the lives of those he loves. It is no coincidence that his transatlantic peregrinations mirror Pereira’s, since the colonial legacy that occasioned both still echoes today. What emerges in the interview is a life that is shaped by terms chosen and unchosen, by empires present and past, by forces accidental and intentional. It is a testament of persistence even among the storms of history that have not ceased to rage over the present. 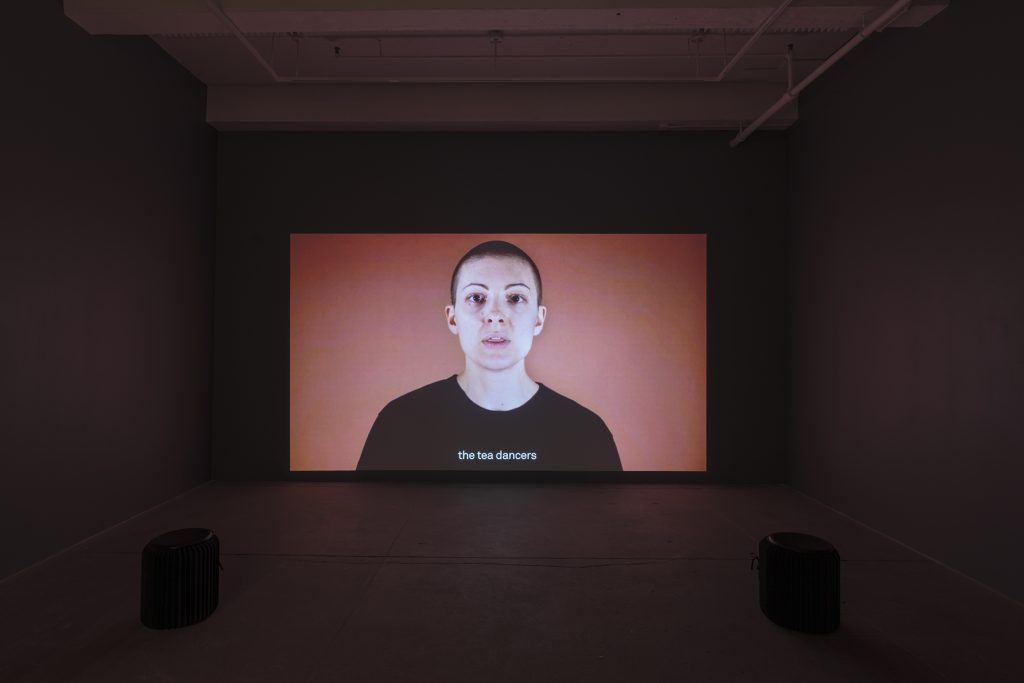 In 2017, Motta joined with John Arthur Peetz and Carlos Maria Romero to form the collective known as SPIT! (Sodomites, Perverts, Inverts Together!). Their initial projects included a series of manifestos for radical queer politics, performed live in London. In this video manifesto, Greek artist Despina Zacharopoulou performs We the Enemy (2017), a compendium of slurs for queerfolk of various ilks and eras. They range from backhanded benignities (‘golden boys,’ ‘fishy girls’) to capital offenses (‘AIDS carriers,’ ‘degenerates’), from the charmingly obscure (‘Ursulas,’ ‘Uranians’) to the oppressively everyday (‘faggots,’ ‘dykes,’ ‘he-shes’).

This language of names once practiced to exclude, to wound, and even to kill. Despite the condemnatory zeal that animates them, however, linguistic signs like these never quite succeed in erasing their objects. Insofar as they name the target of wrath, epithets endow their signifieds—perversely—with discursive existence even as they seek to obliterate the lives of their referents. In the double-bind of discursive violence, margin-dwellers often have no choice but to adopt terms of recognition from the very authorities (linguistic, juridical, religious) who would do them harm. But even malediction enjoys its share of Benjamin’s messianic redemption. Rub them the wrong way and these invectives invert. Taken back by the oppressed, they are turned back against the oppressor. Double-binds double back on themselves. They are détourned, rerouted, redeemed. Indeed, the word queer is the example par excellence of this tactical linguistics. Like the angelic Pereira, who also lists a litany of calumnies he once bore, the queers of SPIT! reclaim the terms that sought to injure them, transfiguring hate into defiant power: a queer conatus. “We,” they proclaim, “are and will always be the enemy.” 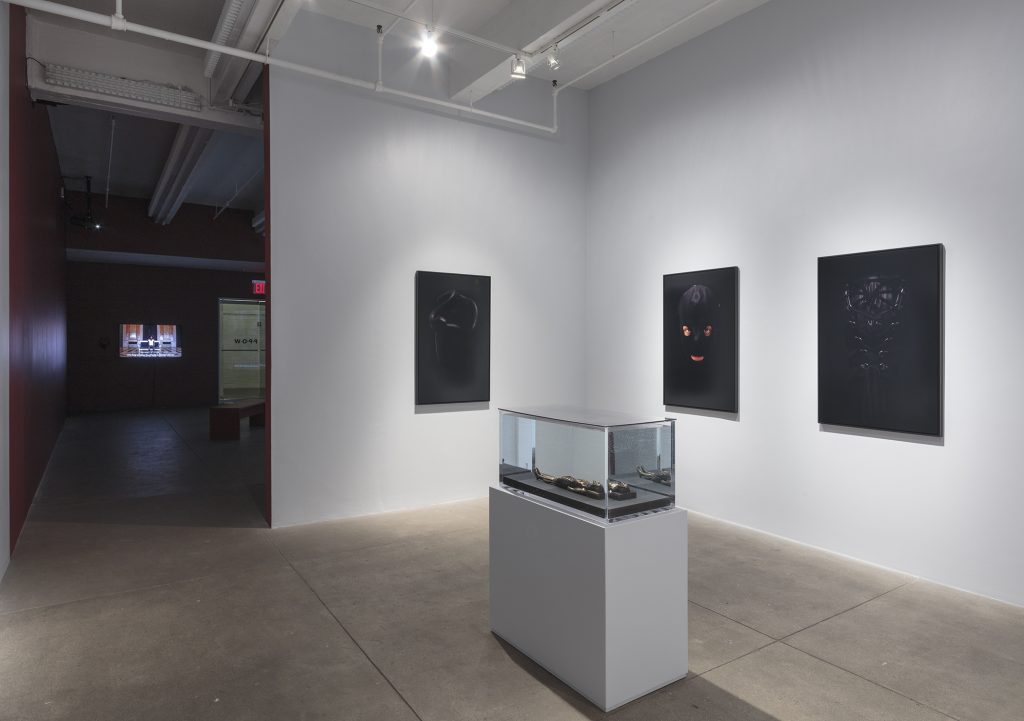 Senhor Morto (2019) and Midway upon the journey of our life/I found myself within a forest dark,/ For the forward pathway had been lost (2019)

The title of the photographs in this gallery cite the opening lines of Dante’ Inferno. In this famous verse, the poet strays from the straightforward path, losing his way on a dark and circuitous road. It is precisely its darkness and its convolutions that mark this trail as the way of sin and the passage to hell. The same is true of the primordial Serpent, whose lithe and twisting body betrayed its sinful destiny even before the Fall. After all, a ‘deviant’ is one who turns away, one who strays, one who meanders in sinuous routes. In accord with Dante’s law of contrapasso, moving off the prescribed track will be punished by forcible dislocation: deviants shall be banished. Dante and Satan both were sentenced to exile—driven out from their homelands—a fate they share with José Francisco Pereira and Paulo Pascoal. 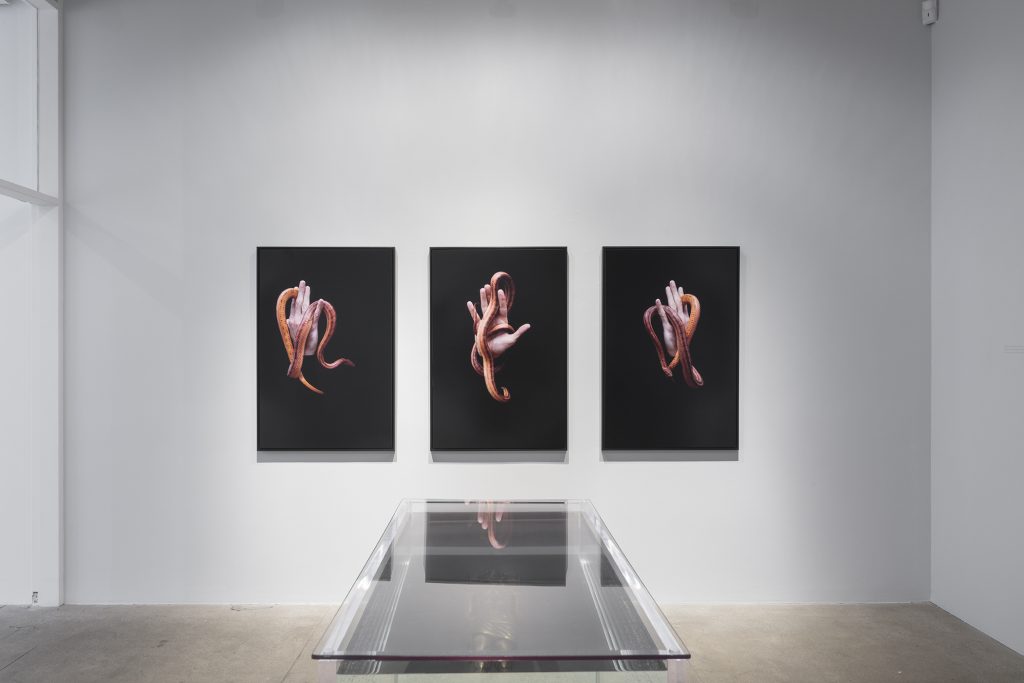 Sleek and louche and dark and sly, the shades in Motta’s photographs are arrayed around a dead lord, Senhor Morto, submerged at center. Motta created the bronze effigy in the image of an 18th century wooden sculpture in São Paulo, an ecclesiastical object crafted by artisans working in colonial subjection. As an artifact of exploitation, the piece indicts the art and religion that assisted the colonial system. As Benjamin wrote in On the Concept of History, “There is no document of civilization that is not at the same time a document of barbarism 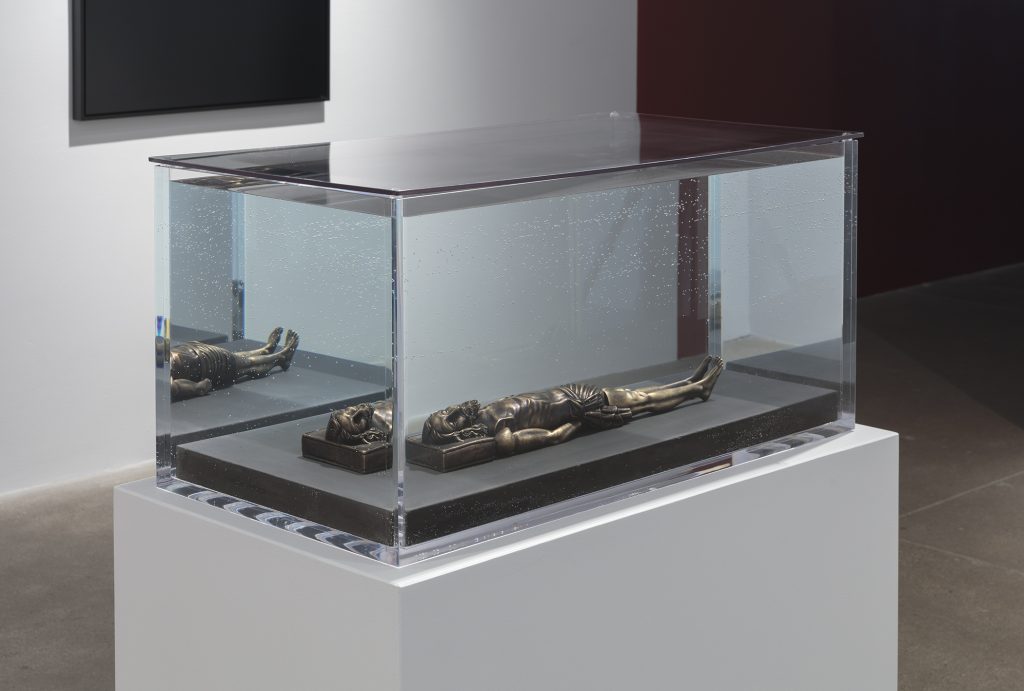 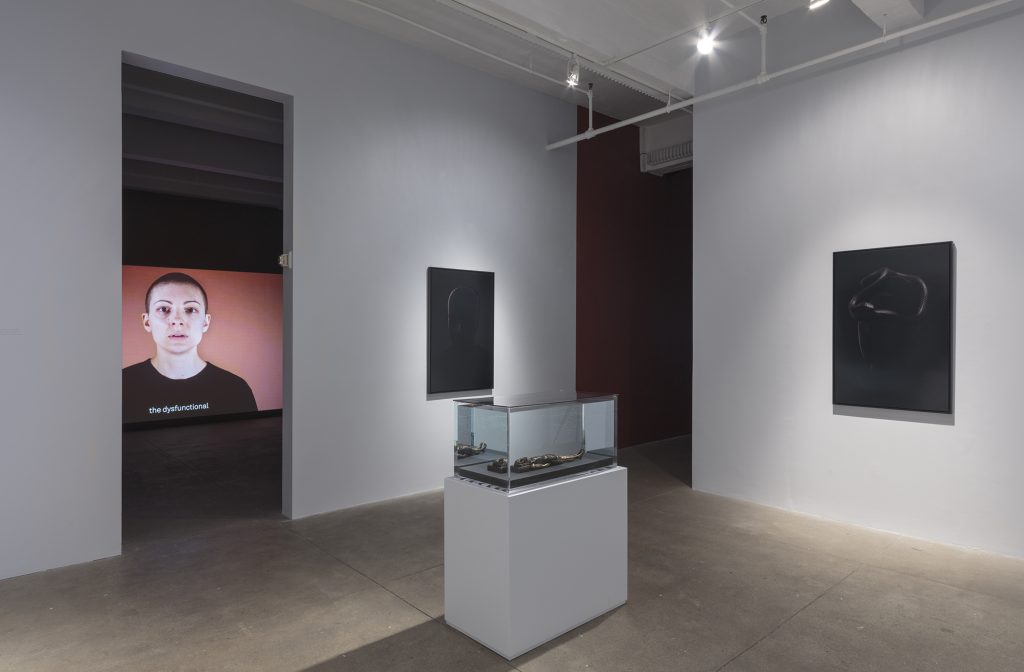 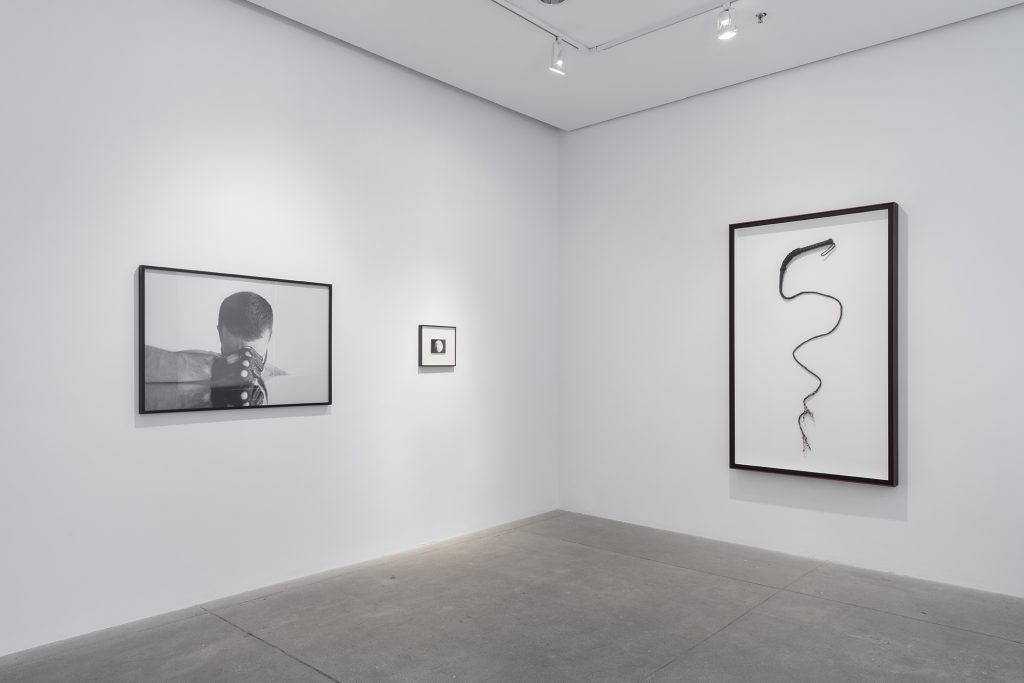 The works in this room reflect on the complex heritage of art and sexuality that occasioned the authorial identity of Motta himself. In Self-Portrait with Whip, for example, the artist restages Robert Mapplethorpe’s once-scandalous photograph of the same title (1978). To summon this memory from the gay art canon is to reassess its cultural legacy. Reflected in a glass darkly, the viewer does not escape capture within the art historical confrontation. It is an invitation to reexamine received histories in light of present conditions. Across the room, a framed whip entitled Corpo Fechado is positioned handle up, in a distinctly serpentine posture. It might appear like fetish gear, but it is also the very prop from Corpo Fechado: The Devil’s Work that signaled historical atrocity. Its frame is a direct citation of David Wojnarowicz, who used the same black-and-red design for his Sex Series (1989). The colors themselves refer to BDSM culture; red is hanky code for fisting. As if on cue, Motta’s fist thrusts out from a nearby work, The Symptom, bearing an ornate magnifying glass. From a mathematically precise focal length, the lens enlarges an alchemical eyeball ring embedded in the monochrome surface. Both lens and ring are more baroque citations, and the mingling of math and mysticism suggests that, just as in previous eras, the certainties of today become the myths of tomorrow. Historical humility is called for. Art and sex, like history, involve mistakes. Mistakes, again like history, can be traumatic to bear, and redemption is neither cheap nor easy. The difficulty is clear enough in the Untitled Self-Portrait that rounds out this room. Motta’s image is twinned in a reflective surface, even as he buries his face on another fist, this one in a leather glove. Combining the fist of defiance with a gesture of contrition, the posture is both mournful and resolute. Sometimes to gaze into a mirror is to see the malefactors of history leering back out, and real progress requires the courage to criticize even oneself. Conatus reminds us: the challenge is to persist. 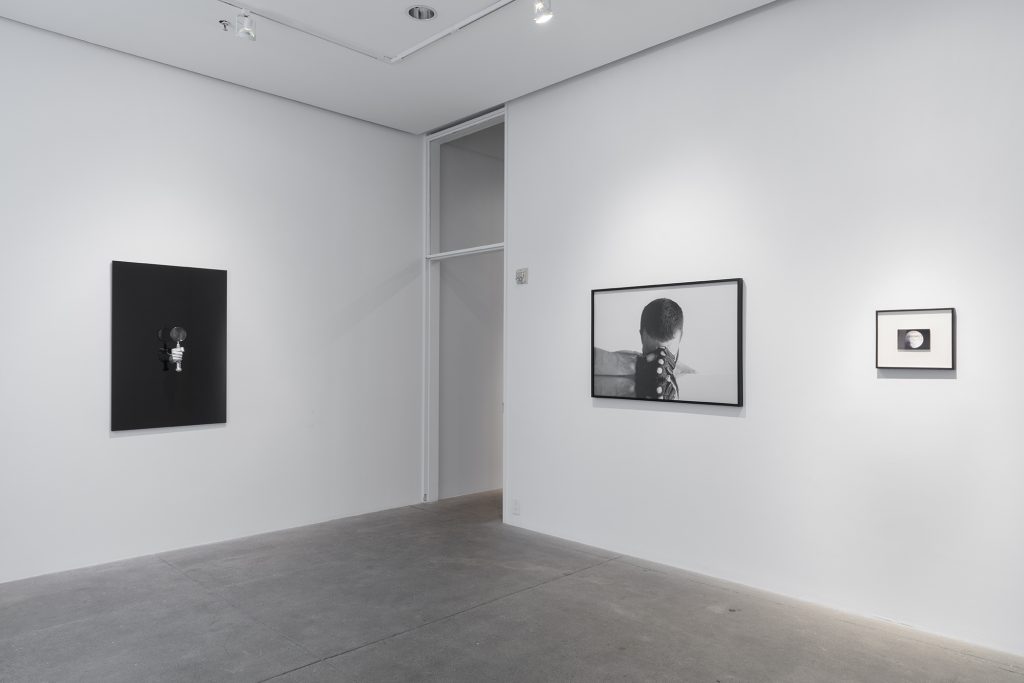 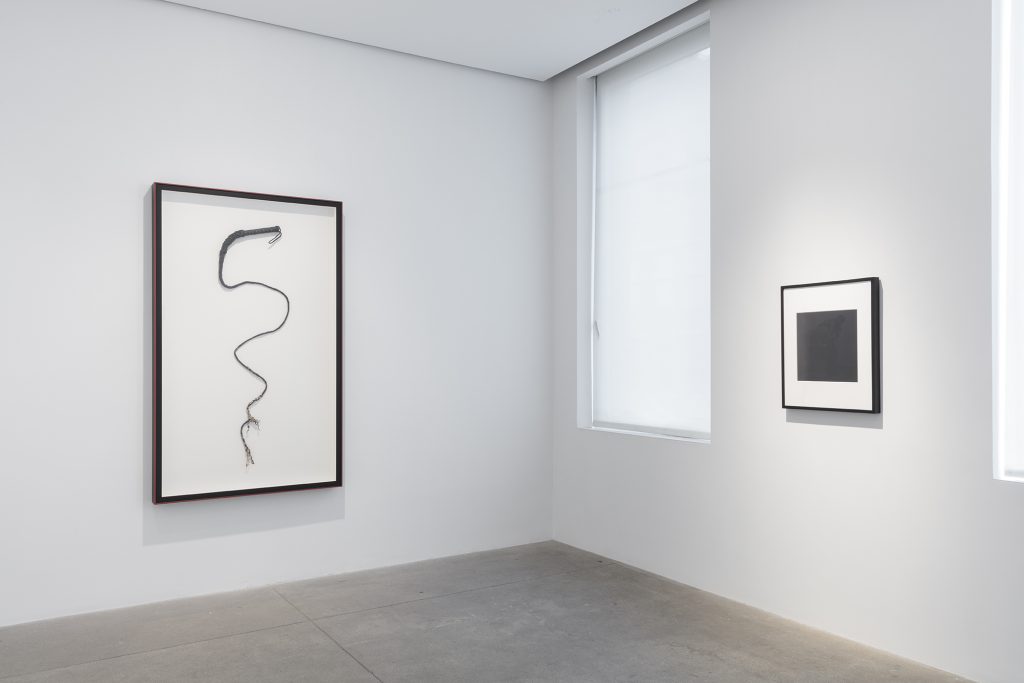