Two newsprint publications and a series of vinyl murals. 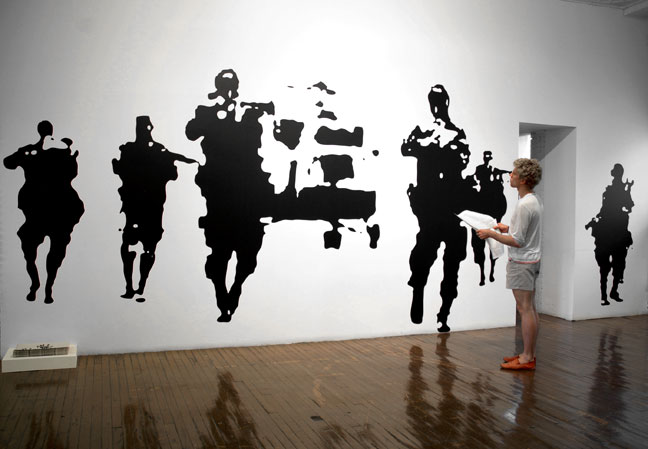 Brief History consists of two large-scale vinyl prints, depicting soldiers in situations of war, and two historical timelines respectively titled Brief History of U.S. Interventions in Latin America Since 1946 and Brief History of Leftist Guerrillas in Latin America. The freely distributed newsprints present the extreme ideological differences that defined the years of the Cold War in Latin America: The emphatic rejection of communism by the U.S. and its actions to prevent its spread, and the formation of dozens of leftists guerrilla groups that attempted to overthrow governments and to replace them with Marxist states. The large black images in the work titled SOA: Black and White Pain-tings # 11 and 15 were appropriated from a Colombian newspaper and depict a group of soldiers advancing with guns drawn. These abstracted and de-contextualized images confront the viewer with a war scene but don’t not reveal who is fighting against whom. This installation is part of the SOA Cycle (2005-2009) a project through which the artist examines the School of the Americas (SOA)—a Cold War institution sponsored by the U.S. government to train Latin American soldiers in counterinsurgency tactics and military strategy, originally established with the aim to prevent the spread of communism in Latin America.

Brief History of US Interventions in Latin America Since 1946