Screening and Talk | A New Discovery: Queer Immigration in Perspective at Museum of Art and Design, New York 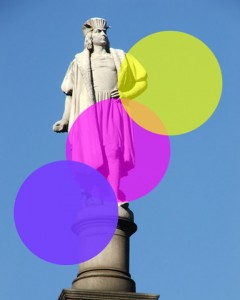 To highlight the issues faced by queer immigrants in the United States, the grassroots organization QUEEROCRACY in collaboration with artist Carlos Motta present A New Discovery: Queer Immigration in Perspective. The event will feature presentations by leading queer immigration activists, a public conversation, and a video screening of a social intervention-based performance held by QUEEROCRACY and its allies on Columbus Day at Columbus Circle.

A New Discovery: Queer Immigration in Perspective attempts to bring attention to the way immigrant and queer politics intersect in the public sphere in ways that both confront, challenge and transform the state mechanisms that police borders and bodies in the United States. This dialogue strives to generate new ideas on how to better make a difference in the lives of queer people around the world.